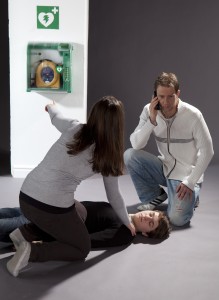 New data from the Journal of the American Heart Association shows that men could be at a much higher risk than women for death due to sudden cardiac arrest. The study found that one in nine men face this type of death, while women’s risk is closer to one in 30.

“These numbers should raise a red flag,” said Donald Lloyd-Jones, MD, ScM, chair of preventive medicine at Northwestern University Feinberg School of Medicine, in a press release. “We often screen for conditions … that are much less deadly. For instance, the lifetime risk for colon cancer is about one in 21 … [but] by comparison, the lifetime risk of sudden cardiac death for men is one in nine, and yet we’re not really screening for it. … Our paper sets the stage for thinking about how we can screen the population effectively to find out who’s at risk.”

The participants were also separated by age group. Of the participants, 375 died of sudden cardiac arrest. The majority of which died before age 70, suggesting that these deaths could possibly have been prevented. For more information on this study, read the article here.

Make sure your office is prepared for any emergency. Check out our first aid training for more.

Who We Work With